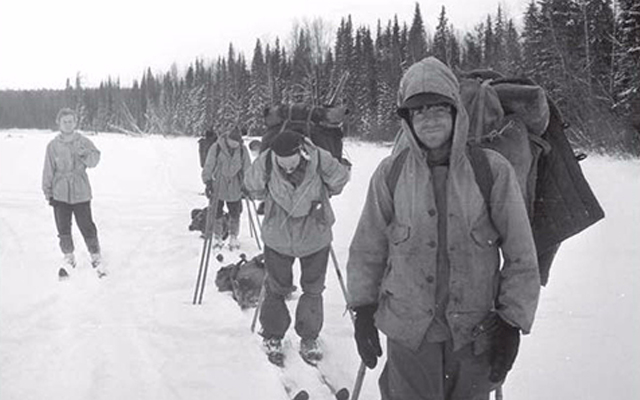 On this Podcast we discuss the horrifying mystery surrounding the Dyatlov Pass incident. So called after, Igor Dyatlov, the leader of a group of young hikers who trekked into the Ural mountains of Russia and the terrible fate that befell them. The group were well seasoned in orienteering and friends from the local polytechnic university. After one of their party left due to illness, an unheeded omen, the other 9 ventured on to their target to cross Kholat Syakhl, the Mountain of the Dead. Where a terrible fate awaited them. [inlinetweet prefix=”” tweeter=”@tconspiracyguys” suffix=”Check out the episode”]The area is now known to locals as the Devil’s Pass.[/inlinetweet]

Bodies in the Snow

When the group never reached their destination, or returned back it was clear that something had gone wrong. But the gruesome scene that greeted the search party could never have been expected. First an empty tent, torn open frantically from the inside, then panicked footprints leading away and towards the campsite in every direction. But things turned stranger as the first bodies were discovered in the snow. Naked and frozen, bloodied and broken they were strewn nearby. Some were up a tree, limbs scarred from a furious climb. Some were buried crawling in the snow back to the damaged tent they had so hastily run from. It would be months later before all bodies were recovered. Revealing a series of broken ribs, crushed organs, cracked skulls and missing tongues all without outward signs of distress. A faint radioactive trace and some victims exhibiting the signs of unnatural ageing only served to ramp up the mystery and the horror.

The theories of what happened began to fly. Tales of strange light orbs in the sky gave rise to rumors of alien intervention, be it attack or abduction. or perhaps secret weapons tests by Russian military, a nuclear weapon blast. Talk of KGB cover-ups in the investigation. Rampaging packs of nomadic Mansi tribesmen on a murderous revenge spree. The spirits of the dead mountain or a strange and unique weather anomaly come to bear on the hikers. There’s even a clue from the campsite that points the finger at the Yeti, the abominable snowman. We’ll check all these possibilities and more as we try to unravel a mystery 50 years in the making.