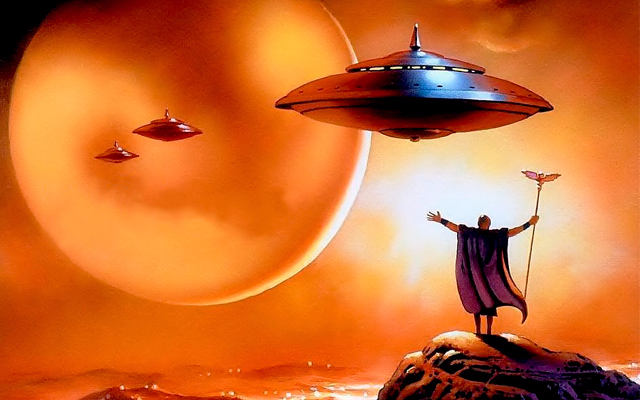 Nibiru and the Anunnaki

On this Podcast we gaze skyward at the fervent and continuing rumors of a 10th Planet and the alien species that reside there, Nibiru and the Anunnaki. A secret world, an undiscovered member of our own solar system that orbits far out away from our celestial family of planets. But the theories also suggest it is the home of an ancient race of aliens. A race which through genetic manipulation and historical and religious lore are the very creators and absent father figures to whom all versions of genesis and human deity worship is based. We talk about the new genesis story of Nibiru and the Anunnaki.

We’ll cover all the current scientific thinking on the subject of rogue planets. The gravitational anomalies on other planets, moons and asteroids that may carry the hallmarks of a hidden giant 10 times the size of Earth. We’ll also talk about the Nemesis theory of a whole twin star system, resplendent with a cadre of planets, a twin to our own sun spinning a destructive path on it’s way back round to us. Elliptical orbits and binary systems, all coming with an Apocalypse level event of devastation that through major gravitational fluxes and possibly even a direct collision. Something which astronomers and geologists have long suspected caused the creation of Earth and it’s Moon.

The theories continue that native to this planet live a species of alien known as the Anunnaki. The children of Anu, which it is claimed are referenced in human history by Sumerian cuneiform tablets and the works of Zecharia Sitchen and Erich Von Daniken and even as the Nephilim giants of the Bible. These original terrans, much like the movie Prometheus, are claimed to be the progenitors of the human race. Taking monkeys and altering their DNA with that of their own slave race of Adamu they created us to mine for gold, thus cementing our ancient and continuing desire for all things AU. They are our forefathers and the template for every deity, God story, and theory of Genesis in history. And according to prophecy, they will be returning.