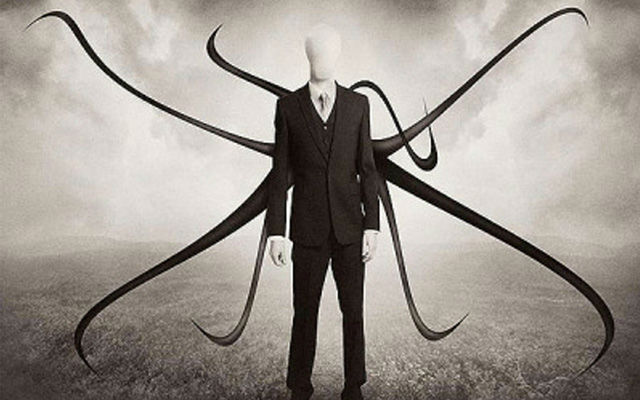 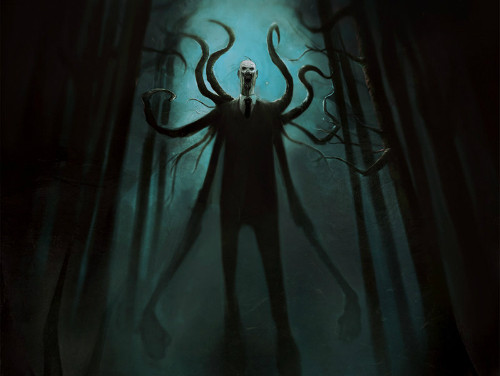 On this episode we look at the horror fairy-tale of the Slenderman. A modern myth born on the internet, whose digital tentacles have stretched horrifically into the real world. The terrifying fiction morphed into a debated urban legend and finally into a very real inspiration for an unbelievable crime. A spectre of a tall thin man with a white and expressionless head atop a well suited body akin to Stretch Armstrong. He is often depicted with wild tentacles in an arachnid format like a demented Dr. Octopus straight from the mind of Hans Christian Andersen, all filtered through the iconography of Stephen King’s IT. The Slenderman is said to attack with mind control and the ability to distort electrical equipment. He has the ability to seemingly appear and disappear at will. Is believed to stalk it’s prey, creating an atmosphere of dread and paranoia known as Slender Sickness. Living in a hidden mansion with the souls of it’s victims and followers alike. We talk about the current mythos of the Slenderman and how far these modern urban legends can go to infiltrate the established canon of ghosts, demons and monsters.

The birthplace for Slenderman was the deep anthology of modern amateur fiction to be found on the forums of Creepy Pasta. A place of contribution and collective streamlining to aggregate alternative folklore indicative of the recycling DIY content of the internet of today. A user named Victor Surge began a photoshop competition to take existing pictures from throught the last decades and design the most terrifying monster to ret-con into their history. It was his creation of Slenderman that immediately caught the imagination and led to a collaborative process of creation for the creature seeing both a complete biography and history. The modern urban legends, futuristic horror fiction, cult re-imaginings and alternate universe theories strewn across the Creepy Pasta forums were the perfect breeding ground for the Slenderman to go viral. The incredible success of the character and it’s story lead to computer games, graphic novels and video animations. We cover the rise of Slenderman and discuss the unique fascination of the character and the profligacy of this new type of modern fairy tale.

Murder, madness and the power of tulpas

As the tale of Slenderman spread in an online cult status bubbling beneath the mainstream it’s influence on young impressionable minds began to spread too. Young adults whose tastes for the creepy and unsettling world of horror and science fiction would see them flock to the huge Slenderman mythos that seemed to blur the lines of reality. It was this influence, and the murderous crime it inspired, that would catapult this story into the glare of the mainstream media. When Slenderman became implicated in murder the societal debate over the power of influential media exploded. In the inexplicable situation some sought to give a tangible explanation to the phenomenon. The theory of thought manifestation and physical conjuring known as Tulpa was proposed as a possible cause. Real world tangible beings and objects born solely out of the power of collective thought, products of the great singular subconsciousness. We cover all facts of the real life crimes connected to Slenderman and similar stories. The theories of mental health issues and more esoteric beliefs like those of  ‘tulpas’ and other ideas of thought manifestation.

NOTE: In this episode there is what appears to be a ‘Slender Attack’. A moment where the recording equipment and audio track have some unusual malfunctions. We have not prepared, edited or altered the recording in any way. It is presented exactly as it occurred at the time, with our genuine unsettled reactions, and is exactly as experienced while recording. The malfunctions had never occurred before this episode and have never been repeated since. We do not currently have an explanation for the malfunctions.